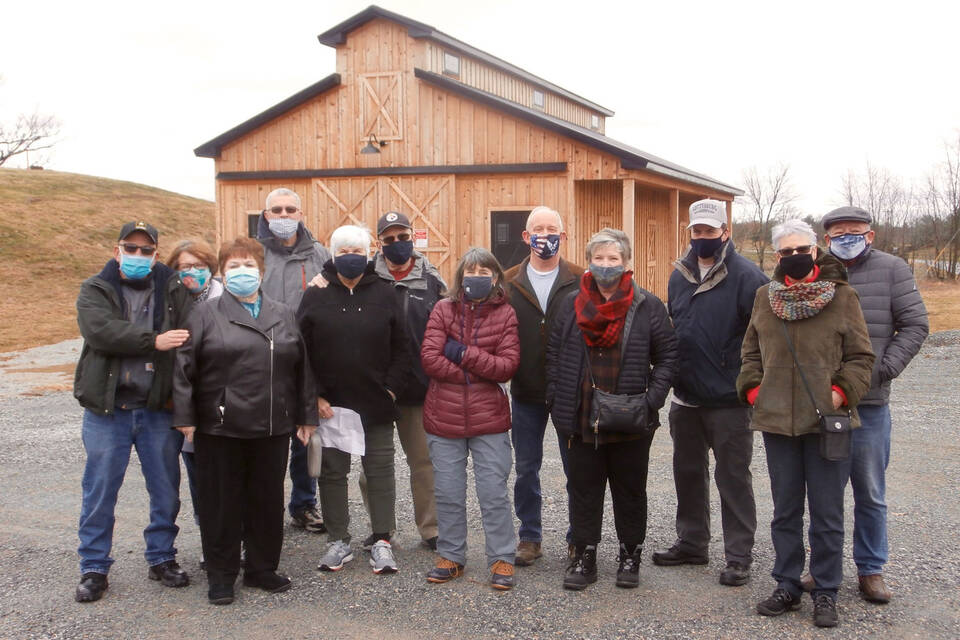 We are grateful to Jim Hessler, a Licensed Gettysburg Battlefield Guide who partnered with Amblebrook resident Peggy Peters to organize an enlightening tour of historic Hunterstown.  Their fascinating insights provide the perfect guide for your own exploration of Amblebrook’s legendary neighbor.

On January 2nd, 2021 an adventurous group of Amblebrook residents started the new year by learning more about historic Hunterstown, located within a mile of our community.  It was interesting for the group to learn that Hunterstown is one of the oldest towns in the country, founded by David Hunter in the 1740s.  At one time, Hunterstown was a thriving village with a town square, also known as the rocking chair capital of the world.  In 1800, Gettysburg and Hunterstown competed to become the county seat for Adams County. Gettysburg received the honor, but it is interesting to consider how Hunterstown might have grown if it had been chosen instead.

Four stops during the residents’ auto tour included the Conewago Presbyterian Church, Tate Farm, Felty Farm and Gilbert Farm. The Conewago Presbyterian Church cemetery served as a field hospital during the Battle of Gettysburg and is the ultimate resting place for 30 Revolutionary War veterans and nine Civil War soldiers. It was in the fields near this church that a Confederate cavalry, led by General Wade Hampton, camped briefly during the morning of July 2, 1863 before colliding with the Union cavalry that arrived in town later that afternoon along what became our modern Shrivers Corner Road.

The group then visited the restored Tate residence, where President George Washington had his horse shod at the farm’s blacksmith shop upon his return from quelling the Whiskey Rebellion in October of 1794.  Residents viewed Beaver Dam Creek and the tree that still exists on the Tate Farm property where George Washington rested during his stop in Hunterstown.  During the fighting on July 2, 1863, the Union cavalry pushed the Confederate troops back through the town and occupied the area surrounding the Tate farm until they fought again on Hunterstown Road later that day.

The tour continued down Hunterstown Road, along what then comprised the Felty and Gilbert farm properties.  At these stops, the guide described the fighting that occurred when Union soldiers under the command of Union General George Armstrong Custer—in only his second engagement since being promoted to General at the age of 23—charged down what is now Hunterstown Road to engage with the Confederates. The Battle of Hunterstown is most famous for the fact General Custer nearly lost his life when his horse was shot out from under him, an event that would have changed U.S. history. General Custer’s horse fell on top of him as a Confederate soldier tried to slash Custer with a saber.  Private Norvell Churchill of the Union cavalry shot down the Southern soldier and saved General Custer’s life.

Total casualties are unknown, but between 40 and 100 soldiers were wounded or lost their lives in the Battle of Hunterstown. The remaining soldiers continued on to Gettysburg’s East Cavalry Field to continue fighting on July 3, 1863. The Battle of Hunterstown holds strategic importance because the Union cavalry delayed the Confederate soldiers from arriving in Gettysburg, protecting the left flank of General Lee’s army. As a result of this delay, the Confederates were then forced to detach other troops to guard the flank, depriving the Southerners of manpower during the critical attack against Culp’s Hill on the evening of July 2nd. A Confederate victory at Culp’s Hill might have changed the outcome of the Battle of Gettysburg or the entire Civil War, but Union forces successfully defended Culp’s Hill and won the great battle.

(Note: The Tate farm and all historic residences in Hunterstown are privately owned, so one should obtain the owners’ permission before venturing onto the property.)

READ MORE ABOUT LIFE AT AMBLEBROOK Discover the unique ingredients that make Amblebrook at Gettysburg the best place to live in Pennsylvania for those 55 or older. Five reasons why you and your favorite pet will find more joy at Amblebrook, an active adult community in Pennsylvania.

DON'T WANT TO MISS ANYTHING?

Get updates on the newest community stories and latest events from Amblebrook at Gettysburg.